Structual Feature
●  Pressurized components are forging matierals, having good strength and impact toughness, avoid the forging default.
●  Middle flange uses combined seal, its switch is operated by hydraulic pressure, easy to change the ram.
●  Equipped with auxiliary oil cylinder, compared with the traditional shear ram BOP, it has the function, smaller volume.
●  Ram rubber is abundant, and use self-contained seal.
●  Manual locking device belongs to the standard configuration, In the event of hydraulic loss, it can ensure that ram remains closed.
●  Manual and hydraulic locking device and auxiliary oil cylinder can be equiped according to customer’s requirements flexibly, and easy to interchange.
●  The internal shell of BOP resistant to low temperature can process pipeline, to make the steam flow inside the BOP, radiat heat. (for costumer’s option).
●  The internal part of BOP resistant to high sulfer which contact the well liquid has Surfaced high nickel base alloy, which can achieve the highest levels of resistance to H2S and CO2.

Shear Ram
Shear ram can cut pipe the well, blindly close the wellhead, and also used as blind ram when there is no pipe in the well. The installation of shear ram is the same with the original ram.
●  In the normal condition used as blind ram, in case of emergency, used as shear ram.
●  Shear damper can be repeatedly cut pipe and not damage the blade, The weared the blade can be reused after the repair. Shenkai produces the shear ram with shear life in more than five times, Allowed to replace the sealing rubber.
●  The ordinary ram blade is integrated with the ram body.
●  The ram blade of BOP resistant to high sulfer is separated with the ram body, which is easy to change blade after blade damaged, and make the ram body be able to repeated use.
●  The contact sealing surface between top seal of shear ram and blade is large, which effectively reduce the pressure on the rubber sealing surface, and prolong its life.

Variable Ram
Variable ram can be used to seal different diameter of pipe string. Variable ram is composed of variable ram, top seal, variable front seal. The installation of variable ram in the BOP is in the same as the common ram, don’t need to change any part of the BOP.

U represents U type ram BOP

Be the first to review “U Type Ram BOP” Cancel reply 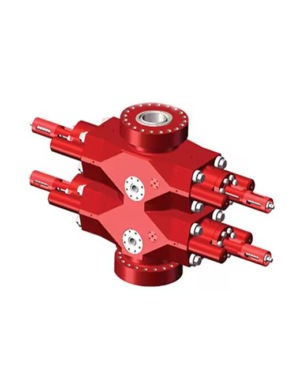