Structual Feature
●  Pressurized components adopts superior alloy steel with good strength and impact toughness.
●  Door seal of the high pressure BOP uses combined seal, which has better seal from the well pressure.
●  Use floating or integral gate, can seal safely and change conveniently.
●  Use buriel-type oil passage, Bearing hinge is separated from the hydraulic hinge.
●  Hinge structure is simple, easy to dismount and mount.
●  Use big arc-type shell on both sides of the chamber, and transit by arc-type all around, to reduce the peak stress of the shell under pressure.
●  With compact structure, smaller than similar foreign products.
●  The internal shell of BOP resistant to low temperature can process pipeline, to make the steam flow inside the BOP, radiat heat.

Shear Ram
Shear ram can cut pipe the well, blindly close the wellhead, and also used as blind ram when there is no pipe in the well. The installation of shear ram is the same with the original ram.
●  In the normal condition used as blind ram, in case of emergency, used as shear ram.
●  Shear damper can be repeatedly cut pipe and not damage the blade, The weared the blade can be reused after the repair. Shenkai produces the shear ram with shear life in more than five times, Allowed to replace the sealing rubber.
●  The ordinary ram blade is integrated with the ram body.
●  The ram blade of BOP resistant to high sulfer is separated with the ram body, which is easy to change blade after blade damaged, and make the ram body be able to repeated use.
●  The contact sealing surface between top seal of shear ram and blade is large, which effectively reduce the pressure on the rubber sealing surface, and prolong its life.

Variable Ram
Variable ram can be used to seal different diameter of pipe string. Variable ram is composed of variable ram, top seal, variable front seal. The installation of variable ram in the BOP is in the same as the common ram, don’t need to change any part of the BOP. 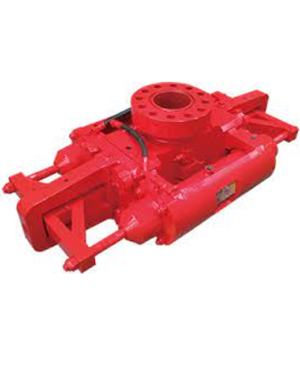